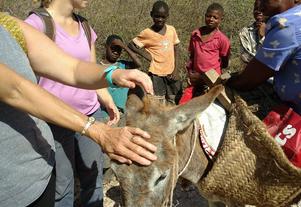 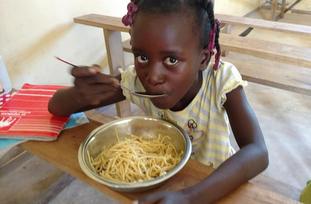 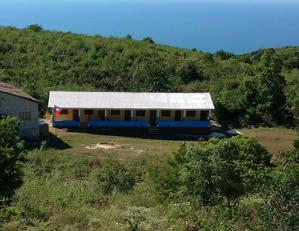 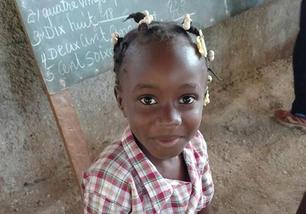 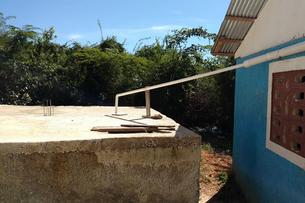 The World is One Place

​Bibliotek Burik
When I dream it’s usually a nightmare, so I’m not a fan of sleep. But recently I had a dream–more like a vision–of a donkey carrying loads of books in his satchels and stopping in front of each classroom at the little school in Bwa Chandel. In my vision the children came out, one class at a time, and to their great delight selected books from Donkey’s collection. The next week Donkey would come back and again, class by class, the children would return their books and pick new ones. Donkey of my dreams would be a sweet and gentle librarian who, overtime, promoted literacy and the joy of reading. The children would look forward to Donkey’s visits with unbridled excitement.

So I shared my vision–my rev–with the teachers one day as we were walking along the trail that leads away from the school, a trail far more suited for beast than man. At first they laughed, especially when I called it “Bibliotek Burik.” But then they were curious. I explained that a library in schools in the United States is a central part of the school building and that weekly visits to the library for stories and books are an essential part of elementary education. ” And then the next week the children bring them back and choose new ones?” one teacher asked. “Yes,” I said. “Yes they do.” I went on to explain that since the children in Bwa Chandel could not go to a library, perhaps a library could come to them via Donkey.

They were sold. Everyone nodded in agreement that it was a “bon lide,” a good idea. I asked if anyone knew of a donkey that might
like to work for me as our librarian. Said donkey would have to possess certain qualities. The teachers wanted to know what the job would pay. After all, they said, “The donkey has to eat.” I could see that hiring a donkey was going to require some negotiating.

The following week the principal, Met Benito, said he’d found a donkey who wanted 1400 haitian gourdes ( about 25 dollars) a trip. What? That’s a lot of hay. I didn’t think there even was 25 dollars worth of hay and water on La Gonave. I whittled the price down to 1000 gourdes and settled for Bibliotek Burik only every other week. Done.

We scheduled the first Donkey Library Day for Friday February 2nd. The plan was to carry a supply of books (thank you to all who donated children’s books in French and Creole) up by motorcycle, meet the donkey where the road ends in Kochon Mawon (Brown Pig) , transfer the books to the donkey and proceed down the trail to Bwa Chandel. Fellow missionary and elementary school teacher Brittany came with me to help. We each carried a back pack loaded with books heavy enough to make me believe I was going to slide off the back of the motor bike every time we hit a steep part of that God forsaken road. Precisely at 9:30 we arrived at road’s end and there was a little lady, the principal’s mom, with our donkey. Our donkey actually turned out to be a good-natured female mule named Millet (French for mule). We loaded her up and the six of us, me, Brittany, Mama Benito, Millet and the two moto drivers, Carino and Fedson, headed down. It seemed everyone wanted in on the first ever Bibliotek Burik.

First stop was the kindergarden class. The last time I had been in the kindergarden room was when a group of nurses came up to do pediatric assessments. It had been a terrifying situation for most of them. As soon as those kids saw me they burst into tears. This whitey only brings pain. Their teacher picked out two books to read to the class and we moved on to first grade to the sound of diminishing sobs behind us. But the other classes were wide eyed with excitement. Even the teachers chose books from our Donkey Library. In fact the whole concept was entirely new and challenging to everyone. First, there were so many books from which to choose. Some of the favorite titles were Garfield (in French), Princesse Academy, Le Petit Prince (the teachers had never read it), Barbie (really?) and my favorite: Kochon Ki Kap Chante (The Pig Who Could Sing). The last is about a pig who lived on a tomb and sang “wi wi wi ” all the time. He scared some children who told their dad who killed the pig. They cooked the pig and ate it and from that day on all those who did so could hear “wi wi wi” coming from their bellies. In Haiti, that could be a true story. Second, there’s the idea that the book is really yours for two weeks to simply enjoy. Then, you bring the exact same book back and get a different one; that was a tough one because the teachers wanted to collect all of them at once and give them to me the next time. I wanted the students to get the idea of returning a borrowed book for the privilege of getting another. We’re all learning.

And so Bibliotek Burik began and continues. We’ve had four library days and have five more planned for the remainder of the school year. Our new librarian is a little boy simply named Donkey, though I miss Millet. She even let me ride her on that first day. Time to time, a dream does become a reality.

Cher zanmim yo, it’s been a long while since I’ve written, My writer’s block is largely due to a serious lack of internet connection in Haiti among other things. I’ve missed you. I just took a break from writing to make a couple of pizzas for Easter. And so I wish you all a Happy Easter, Bon Fet Pak. Until next time, Nancy